The terrorists might not have won outright, but they’ve clearly succeeded in influencing our airport routines. For Thanksgiving weekend travelers to pretend otherwise is akin to wearing blinders. And if the pat-downs continue in the prevailing direction, temporarily wearing little else beyond blinders.

The terrorist danger has also affected the psychology of the people who, among other things, buy toys and games. Many potential customers are spending mental energies each day balancing the importance of dignity against the possibility of death. Terrorism can terrify.

There’s a school of thought in consumer psychology called Terror Management Theory (TMT) that might prove useful when responding to these shoppers’ state of mind. Formulated by researchers at University of Kansas in the late 1980s and refined by multiple studies since then, TMT says that our realization we will someday die leads us to build legacies of children, fame, and fortune.

TMT research projects at Stanford University conclude that a related protection against death anxiety is high self-esteem. The colloquial phrase “I was so embarrassed I could’ve died” reflects a relationship between threats to self-esteem and one’s demise. The TMT reply is “We are all going to die. It’s only a question of when. Get used to it by feeling good about yourself while you’re still alive.” 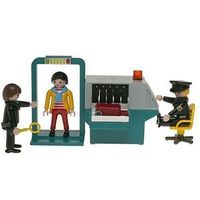 I’m about to suggest to you that you leverage these TMT motivational forces to move the merchandise. So a first order of business is for you to decide if you’re ethically comfortable with using an underlying fear of death as a sales motivator.

In my opinion, it’s fine to deliver value by relieving your customers’ anxiety. The three caveats for me are: Don’t violate the law to make customers feel good. Don’t gouge people by charging excessive prices. And don’t pressure people to buy when they’re seeming to struggle with temptation.

But those are my rules. You need to decide for yourself.

If you’re with me, here’s what I propose:

Regarding this last one, let’s decide please that TMT motivation is reserved for adults. Reminding children they’ll inevitably die is nothing if not ghoulish. And teenagers—those reckless rascals—behave and misbehave on the assumption they’ll never die.