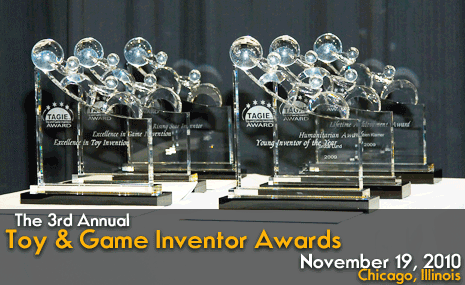 I am on my way back from a spectacular four days in Chicago in which I participated in Mary Couzin's ChiTag, TAGIE Awards and the Toy and Game Industry Expo.  It was quite an experience and I am currrently putting together my thoughts which I will publish tomorrow.  In the mean time, I thought you might enjoy this appreciation of toy and game inventors that I wrote for the Toy & Game Inventors Awards Dinner brochure as its introduction.

When you have a moment; try asking this question:  “What was your favorite toy or game when you were a kid?”  I promise you, no matter how serious the individual; no matter how important (or self-important) they are, they will always give you the same reaction.  They will look surprised, they will pause and then slowly their face will soften, the color in their face will rise and…they…will…smile!

After you have them smiling, follow up with this question:    “What toy or game did you have as a child that had an influence on your life?”  They will stop smiling, they will think (sometimes for a while) and they will (about 50% of the time) come up with a toy or game that they felt either shaped their life or was a harbinger of who they were to become.

Reuben Klamer, the creator of the Game of Life and the winner of last year’s lifetime achievement award, told me about the doctor who saved his life (something for which we are all grateful…but probably not as much as Reuben).  Later when things had calmed down, the doctor said to Reuben:  “You know I became a doctor because of the Game of Life.”  Reuben responded with a quizzical:  “Why is that?”  The doctor answered that when he was a kid and he played The Game of Life, he always won when he was the doctor.

Interestingly, I was at my doctor’s office shortly after that and was being questioned by a female intern there.  We had a quiet moment so I asked her my two toy questions and she told me that when she was a little girl, age 5, she didn’t have a favorite doll.  She had a microscope…and she carried it everywhere she went.

So, how many more doctors, architects, construction workers, artists, musicians and scientists chose their path in life because of the enthusiasm sparked in them when they were children by the toys or games with which they played.

You know, we really need to find that out.  Why, because toy inventors probably have a greater impact on society and the future than any other cultural force?

How many Harry Potter Books has J.K. Rowling sold to date:  400,000,000!  How many toys invented by Jeffrey Breslow, who received the first TAGI Lifetime Achievement Award, have been sold to date:  over 1 billion!!

I would estimate that Jeffrey Breslow and the company he co-founded, B.M.T., whose toys have been estimated to be in 85% of American homes, has had a greater impact on the future of our country than virtually any person.  The fact that his production has been prolific and that the users of his creations play with them when they are still forming means that the adults who lead us today were shaped in part by Jeffrey, Reuben and this year’s honoree, Eddie Goldfarb.

I don’t really know how many people became dentists because of Eddie’s Yakkity Yak Teeth; got a bigger boat because of Shark Attack or became a farmer because of Milky the Cow.  I do know this, a lot of children had fun; a lot of adults have great memories of their childhoods and a lot less criminals walk the streets.

Toy inventors teach children to enjoy life in the present and have a dream for the future.  Let’s give them all the recognition they deserve and the thanks of a nation and the world.