Marshal Cohen, Chief Industry Analyst for consumer market research firm NPD Group, refers to it as the thinning middle. He’s talking about the trend for consumers to move away from middle market choices toward the low end and the high end.

I like to place more attention on where the profits are than on where they aren’t, so inspired by a quote from economist Sung Won Sohn, I call it “barbell retailing” to refer to the bulges on either side of the thinning middle.

Two current shopper psychology dynamics are encouraging the barbell retailing of toys, and so providing opportunities for you to sharpen your merchandising and marketing.

One of these dynamics is the desire of people to protect their children and their pets. When adults realize they must trim expenses, among the last areas to be hit are the outlays for those they consider to be the defenseless members of their families.

In fact, there is often overcompensation. This can take the form of the adult buying the upgraded versions for the kids and dogs at the same time they’re accepting the barebones for themselves. In other cases, it takes the form of splurging on a few selected fun products the children will be sure to enjoy while shopping for the basics for everything else. 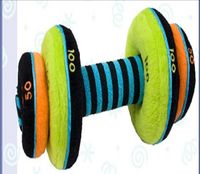 The second dynamic encouraging barbell retailing is social networking. Barbell retailing is an example of what social psychologists call “group polarization.” When a group of consumers are making decisions jointly, such as by actively exchanging ideas about their shopping adventures, those consumers are most likely to move toward more risky alternatives, such as spending on luxury items. But if they don’t move in that direction, they’re most likely to move toward more timid actions, such as spending like tightwads. What they are least likely to do is to stay in the middle.

Another aspect of social networking is the ecommerce brain itself. We’re all overwhelmed with data, so we want to simplify. It’s easier for the consumer to filter decision making by high-end and low-end alternatives than by high-, middle-, and low-end.

Barbell retailing is a change in the consumer behavior which many retailers grew accustomed to in the past. Traditionally, shoppers showed extremeness aversion. When presented with the bargain, midrange, and luxury choices, the average shopper picked the midrange. But protecting the defenseless, group polarization, and the urge for simplicity all become more likely at times of uncertainty, and consumers worldwide are collectively experiencing economic uncertainty.

In your merchandising, feature both premium and bargain choices for product lines. If you need to save on inventory expenses, deemphasize the midrange choices. For any midrange lines you do carry, project a strong lifestyle personality of staying the course and showing perseverance in the face of uncertainty.