The Game of Life and playing cards have had a good week as they became the latest inductees into the National Toy Hall of Fame at the Strong in Rochester, New York. They edged out a competitive field of ten other classic toys and games to take their place with the 44 toys already honored by the National Toy Hall of Fame. From my perspective, playing cards and The Game of Life make great additions to the Hall and illustrate some of the very best qualities that games have to offer. 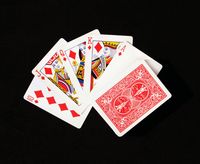 Playing cards make me think of one of last year's National Toy Hall of Fame inductees–Nintendo Game Boy–in that they're a "handheld gaming platform" that provides an entry point to an almost limitless number of ways to play. Whether it's a solo game of solitaire, a simple game like war or rummy, or a complicated social game like bridge or pinochle, playing cards have proven their value through the centuries.

I grew up playing card games like cribbage and euchre, but I also played The Game of Life in the 1960s. I always liked Life for how much richer you could get than with the Depression-era pricing of Monopoly. In fact, my sister and I sometimes borrowed the bills from our Life set and multiplied all the property values in Monopoly by a factor of ten to make things more interesting. The Game of Life offers players a financial element like Monopoly but, especially for kids, it also serves as a simulation game that lets you play out how your life might proceed.

Now it's time to start gathering the nominations for the 2011 inductees to the National Toy Hall of Fame. I hope that everyone who's incensed that their favorite still hasn't made into the Hall will get busy and start nominating so that I'm sure to hear about the classic playthings that deserve the honor next.