That could change if Microsofts new “Kinect” takes off.  Here is how The Economic Times in an 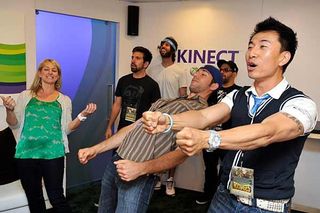 article entitled “With Kinect, Microsoft aims for a game changer” puts it:

Microsoft has one-upped Sony and Nintendo by eliminating game controllers and their often nightmarish bounty of buttons. Kinect peers out into a room, locks onto people and follows their motions. Players activate it with a wave of a hand, navigate menus with an arm swoosh and then run, jump, swing, duck, lunge, lean and dance to direct their on-screen avatars in each game…Kinect also understands voice commands. People can bark orders to change games, mute the volume or fire up offerings, like on-demand movies and real-time chatting during TV shows that flow through the Xbox Live entertainment service.

Kinect is an add-on to the Xbox that will sell for $150.  Microsoft has not done well in recent years introducing new products but Kinect sounds like it could be a winner.  If it is, batten down the hatches, because their could be a big wave coming.