I hate to say I told you so, but the efforts of Wal-mart and others to reduce the number of SKU’s, thereby reducing the variety of product offerings on the shelves, has not worked. (I told you so! Sorry, couldn’t help myself – I don’t get a chance to say that very often.)

Wal-mart has found that while customers like the clean look of Project Impact, they stopped shopping there, according to a recent article in Fortune. So they are putting products back on the shelves that had previously been dropped. 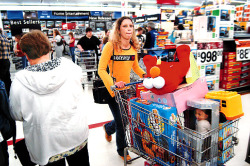 We sure do hope that includes toys. There's nothing sadder than a little tiny toy department in a great big Wal-mart, with few choices to be had. Instead, it should be a world of toys, a toy destination for the consumer. If there is a toy to be had, then Wal-mart should have it. Perhaps, 'When you think toys, think Walmart'?

The consumers asked Wal-mart, “Where’s the beef?” and Wal-mart heard them. Let’s hope they heard “Where’s the toys?” as well. Wal-mart, my advice to you is   stock those shelves with toys!