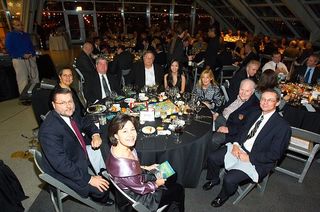 As you have read in earlier blogs by me and my colleagues, Marvin Glass and Eddy Goldfarb invented the full time toy and game inventing business here in Chicago in the late forties. After the mild mannered Eddy moved to the west coast, Marvin became something of a celebrity. He was friends with Hugh Heffner, spent time at Heff’s nearby mansion, and even appeared in an issue of Playboy with Bunnies playing with some of his toy creations. Marvin was a showman and became known outside of our industry.

The idea of toy and game inventor as celebrity in America seems to have gone to the grave with Marvin.

In Europe, Game inventors in particular are well known. Winning Germany’s Game of the Year means instant celebrity and increases in sales of up to 500,000 games.

We have been working on resurrecting the idea of making our inventors into celebrities.

Many companies here are picking up on this idea. Educational Insights is sending Tim Walsh across the country on media/retail tours for Blurt – think book tours. RPToys in Canada is also using Tim to promote TriBond. EI has featured inventor’s pictures and their stories on some of their packages. Out of the Box Publishing has always credited inventors on their packages. Buffalo Games, Patch Products and Mindware have interviews with inventors on their websites. Many inventors are using social media to promote their own games.

Considering how important play is to our culture and to our development as human beings, the creators of successful toys and games SHOULD be recognized for their contributions.

Actors have Emmys and Oscars.

You have heard me say a thousand times that inventors are no different from these other artists. The creative processes are similar.

Our third annual Toy and Game Inventor of the Year Awards Dinner will be held in Chicago on November 19th.

The venue this year is the Museum of Science and Industry, which will be presenting a Jim Henson Retrospective at that time of our event, so the location is perfect!

The TAGI Awards recognize toy and game inventors from around the world responsible for some of today’s hottest products, as well as those inventor greats who have stood out in the eyes of their toy industry colleagues for their exceptionally innovative spirit of creativity, or humanitarianism.

Voting has begun. Visit www.tagieawards.com to cast your vote for your favorite inventor in the following categories:

Also being celebrated and honored are:

I hope you can join us. It will be a magical evening.