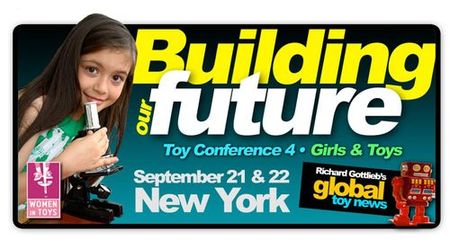 I am extremely pleased to announce this year’s stellar group of participants for the Building Our Future Girls & Toys Conference.  The conference, a by invitation only event, convenes in New York on September 21 to consider the question: Do the toys that girls play wiht as children have an impact on the professional, personal and academic choices they make as adult women?

We chose participants who were thought leaders in academia, media, research, retail, manufacturing and who could provide insights on the topic.  I am going to announce them by their discipline.  Today we begin with the Media:

Madeline Di Nonno,  Executive Director Geena Davis Institute on Gender in Media and its programming arm See Jane work with entertainment creators and companies, educate the next generation of content-creators, and inform the public about the need to increase the number of girls and women in media aimed at kids and to reduce stereotyping of both males and females.

Samantha Freeman, Founder & Executive Producer OUT OF THE BLUE and co-creator of Blues Clues

In my next posting – Academia and Research.