The tools we use determine the results we can achieve. If your only tool is a hammer, then everything you produce will be made with nails, which is fine if you are building houses, but not so good if you are in the automobile business or even the toy invention business. Our tools give us capabilities and limitations.

Years ago we acquired several technologies that revolutionized our business and what we were capable of creating. As a cavemen at heart, a troglodyte really, in the early days we carved everything we made out of plastic with an exacto knife. Not literally of course, but we made primitive concepts with primitive tools. We used existing motorized gearboxes torn from existing toys and we used existing electronics scavenged from whatever we could find (Yak Baks mostly).

We may have been the last people in the toy industry to get a fax machine. I couldn’t see what the use of it would be, but was told that once I had one I would never be able to live without it again. (Thank you, Steve.) That was the first time we adopted a new technology and our eyes were opened a little. 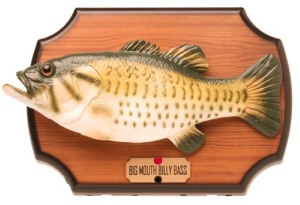 Slowly, like a glacier, we began to create toys with some electronics, arguably more sophisticated than before. The change had begun. For years we knew about servos (a.k.a. servo motors which may be precisely controlled in speed and degree of movement using a microprocessor) but didn’t know how or why we should use them. Instead, we gutted a hundred Billy the Bass to scavenge their terrific motor mechanisms.

On the advice of another industry friend, we took the plunge and started to use servos and the basic stamp prototyping electronics system. With the ability to create such precise programming, were were suddenly able to make more sophisticated mechanisms that did remarkable things that would have been impossible before. Our work was transformed by the new tools we had learned to use. Others learned from us to do the same. We became widely known as the "Masters of Mechanisms."

Other technologies over the years have had significant effects on our capabilities and efficiency, enabling us to do more, faster, better, cheaper. Now we are always looking for the next technology that we might adopt that could transform our business, amplify our capabilities, allow us to come up with better ideas, build better prototypes, create more sophisticated products, or run our business better.

Onward and upward, the best is yet to come. Embrace change, embrace new technologies. Look for ways that you might transform what you do and how you do it. To survive and thrive in a fast paced world of business, we have no choice but constant, relentless, and at times monumental change.