Remember streakers? They drew attention to themselves by doing their thing in public. The hobby games segment of our industry is promoting the PiP Campaign – the Play in Public Campaign – a fabulous idea. This movement was started by Kevin E. Schlabach and you can read about it on Kevin’s website. I contacted Kevin about extending the PiP Campaign to mass and specialty market games and he agreed. 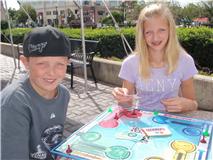 Although Kevin’s focus is on the hobby market, I think this is a powerful movement to include all ages and all forms of play. Encourage kids to play outside again. Ask restaurants and cafes to stock board games of all kinds so there is something for everyone. And, take a game or a toy to play with everywhere you go and play at every opportunity.

What better advertisement for our industry! The world would be a better place if people took time to play and played more with others. I’ve long talked about getting our industry together along with celebs to sing a rendition of the extremely successful and groundbreaking 1971 Coca-Cola song "I’d Like to Teach the World to Sing in Perfect Harmony" and replace ‘Sing’ with ‘Play’. I’m thinking about a worldwide campaign to bring people together. The PiP Campaign could help ignite that idea as well as being powerful by itself.

Kevin, why did you start this campaign and what is your vision?

PiP (Play-in-Public) Campaign because I feel that more people would play games if they simply knew what is available. The mainstream stereotype of board games seems limited to what people remember from childhood. Most people have no idea of the wide variety of games brought to market in the last 10 years, especially since they aren’t carried in big box retail stores. Every time I convince sometime to try a game, they are always excited to learn more. At some point I just decided that getting the most passionate people within the community to spread the word would be the most effective. After weeks of thinking and writing, I ended up with the PiP Campaign post on my Seize Your Turn website.

I didn’t start out with a long term vision. It was just a philosophical idea and I was hoping it would resonate. As the fire ignited, I’ve quickly responded to people’s suggestions and helped the tribe grow. This included starting a

Facebook Fan page, expanding the definition of games in the campaign (originally it was only for "euro-games"), and working with publishers to do giveaways to encourage participation. Being at the center allows me to react to ideas and suggestions, and my goal it to keep the momentum for as long as possible. If it loses momentum at some point, then I will simply rekindle the fire again next summer. It’s only been two weeks and I’m a little surprised of the journey so far.

The goal of this is the same as the goal of my website or game group. I simply want to help spread the joy of learning, playing, and collecting table top strategy games."

Thank you, Kevin, and congrats on a great idea off to a great start!