The Boy Scouts are a dynamic organization.  I found that out after I posted "The Boy Scouts and Girls; a changing relationship" on my Out of the Toy Box blog.  Little did I realize the great conversation this would start both on the comments section of the blog itself but also on various Linked In groups.

I want to widen the discussion to include the Girl Scouts and other interested parties so am reprinting the posting below.  OK, Girl Scouts, let's hear what you think.

Here is the posting:
The Boy Scouts have been having a hard time of it the last couple of decades. At  least that is what an 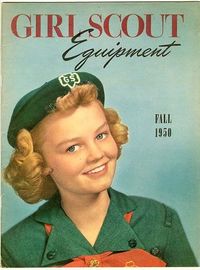 interesting story in the New York Times entitled "Boy Scouts Seek a Way to Regrow Ranks" tells us. Plagued by a dramatically falling membership, the organization's numbers have declined by 42% since 1973.

In order to turn things around, the Scouts have been reaching out to Hispanics and other minority groups. It seems, however, that the one group they are not aggressively pursuing is the one that wants in; girls. Some girls want the more physically active experience the Boy Scouts offer and though the organization is not letting them in to their under 13 age programs they have been letting them into their Venturing program.

Perhaps you knew that the Boy Scouts let girls into their over 13 program but I did not and I have to say I was surprised. An organization that has a 100 year history of being all about boys is to be congratulated for making any move in the direction of rethinking its mission. I guess a plummeting membership tends to focus the mind.

Girls want into the under 13 programs as welll and I find that to be yet another  interesting comment on the changing face of gender in the United States. Here is how the article quotes one 16 year old girl expressing her opinion: "I don't want to sit around and make quilts and sell cookies," she said after she expertly glided down a mountain-boarding course on which a few boys had tumbled. "I want to do stuff."

And what do the boys think? "It would be more cool with them," said Shane West from Jupiter, Fla. Why? "They're girls." Rocky Spiker, from Utah, said girls would "keep us in line." Ben Rosenbaum, from California, said, "Women deserve the same stuff as men do."

It will be interesting to see what the Boy Scouts do and how the Girl Scouts would in turn react to any move of that nature. It's the 21st century and a lot of hide bound concepts are coming into play.

For those of you interested in this subject, we are putting on a Girls and Toys conference on September 21 and 22.  We will be asking the question:  Do the toys that girls play with as children have an impact on the professional and academic choices they make as adults.  Let us know your thoughts.