Tranformers, G.I. Joe, Iron Man and Toy Story aren't the only films about toys and games. Have you seen Toyland or Under the Boardwalk: The MONOPOLY Story? I attended the Sarasota Film Festival to see the debut of Tim Walsh's Toyland and am working with Kevin Tostado, Producer/Director of Under the Boardwalk: The MONOPOLY Story to bring his film and a Monopoly Tournament to ChiTAG. These are interesting guys with great films. Since there was so much to say, we'll start with Tim and catch up with Kevin next week. 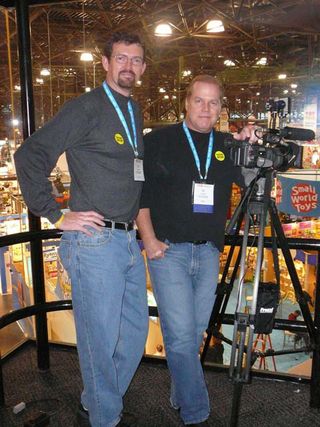 Tim, tell us the Toyland story. "Toyland came to be after a documentary film director named Ken Sons bought my book Timeless Toys. He was impressed by it and asked if I would like to come on board as a Creative Consultant and do a documentary film on how toys and games are created and licensed to toy companies. Since I had met many of the inventors he wanted to interview, I helped him choose who to sit down with. We interviewed Betty James (Slinky), Milt Levine (Ant Farm), Eddy Goldfarb (Kerplunk, Battling Tops, Yakity Yak False Chattering Teeth, etc), Burt Meyer (Lite Brite, Toss Across, Rock 'Em Sock 'Em Robots, Inch Worm, etc.), Reyn Guyer (Twister, Nerf) and many more toy design "legends." We interviewed students and faculty at Otis College of Art & Design, which is one of only two college that offer a 4-year degree in toy design, and the playmakers at Big Monster Toys, the largest and most prolific toy design firm in the world. It was so cool.

About a quarter way into the project, Ken and I realized that we didn't have "an outcome in question." In other words, we didn't have a compelling reason for people to watch the film to see how it was going to end. Sure we had a ton of cool toys, and inspiring inventors, but the format of "here's and inventor and here's the incredible toy he invented, and here's another inventor and here's the incredible toy she invented…" got pretty repetitive. Ken knew that I was a game inventor and he asked if there was a game or toy that I had shelved or that I hadn't really developed yet that he could follow throughout the film. His idea was to show the creation of a concept from idea to prototype to pitch meeting, all the way to seeing it come off an assembly line. This added a lot to the film because we were then able to shoot at Toy Fair where we talked to Mike Hirtle, the Head of Global Product Acquisition and Inventor Relations for Hasbro. He became our expert "voice of reason" throughout the movie as we tried to get this product to market. One of the reasons Toyland took 2 1/2 years to complete was because I couldn't find a company to license my toy! Ken kept saying, "Well we can't end the film until we have an ending to this story. What's going to happen?!" It's the nature of documentary film making. You really don't know the outcome until it happens and hopefully you're there to "document" it. We did and we're very proud of the result. I think the film is authentic because it's not all a bed of roses. We had a good number of toy industry veterans come to the premier of Toyland at the Sarasota Film Festival and a number of them said that we really captured the struggle of what it's like to be an independent toy inventor. It's a tough racket, this toy trade.

I don't want to give away the ending, but it was one crazy ride and we caught it all on film."