One my fond memories of childhood was playing in our neighborhood sandbox.  We would sit in there for hours, making cities and then digging trenches which we would fill with a stream of water from the garden hose.  This would allow us to create our own little pre-Sim City world of roads, towns and rivers.

It was therefore impossible for me to skip over the New York Times article “A Newfangled Sandbox Arrives (Check out the Canals)”.  It was about a wonderful new playground in downtown Manhattan that has been in the making for five years.  It was created by the group Imagination Playground.

Imagination Playground describes itself on its website as follows:

architect David Rockwell to encourage child-directed, unstructured free play. With a focus on loose parts, Imagination Playground offers a changing array of elements that allows children to constantly reconfigure their environment and to design their own course of play. Giant foam blocks, mats, wagons, fabric and crates overflow with creative potential for children to play, dream, build and explore endless possibilities.

How great is this new playground? 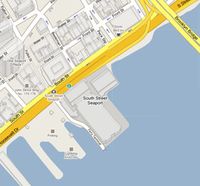 Instead of monkey bars and jungle gyms, there are fountains with canals of cascading water that can be dammed in infinite ways, or transformed into a network of rivers. There is an engaging set of lifts and pulleys. Play is proctored and interaction fostered by a staff of city workers trained as “play associates.”

I would love to have played (heck, I would love to play) in a playground like that.  So, I started to think.  Is a sandbox a toy or a play environment?  In fact is a playground or a theme park really just one enormous toy that we play within rather than with.

Maybe we should all make a pilgrimage to downtown Manhattan (it’s near the South Street Sea Port) and see what it’s all about.  We could probably all learn something about making better toys.