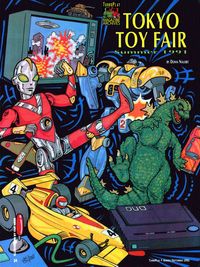 different the dynamics of the Japanese toy market are from those with which readers are familiar. Walking around Tokyo Toy Fair is a disconcerting experience for Westerners. Some familiar toys can be seen, but most look strange, and even the familiar ones look alien in Japanese packaging with its extremely busy graphics.

There is probably only a 10% overlap in toys sold in the US and Japan. Around  half the Japanese toy market is made up of character figures derived from Manga comics and Animé cartoons. Large bulky toys are almost entirely absent from Japanese toy shops because the tiny apartments, lacking backyards, have no space to store big toys. Also pre-school is a small category in Japan, because even toddlers are given character figurines to play with.

US toy companies have struggled in Japan and wasted a lot of money trying to import and sell their own products and trying to transplant their business model. Mattel has failed to persuade the Japanese to

buy Barbie dolls. Bandai and Tomy Takara have by contrast been quite successful in western markets. Transformers and Beyblades are Tomy Takara properties, and Tamagotchi and Power Rangers from Bandai have sold well in the West.

Japanese toy inventors have an outstanding skill at creating toys of both mechanical and electronic ingenuity, as exemplified by Transformers, Tamagotchi, Micropets and many robots. Perhaps necessity (in the shape of very limited household space) has been the mother of invention.

of the market and develop corresponding toys. This is unlikely to happen when you take into account that the total toy market value in Japan is US $ 7 billion, which is little more than the sales of toys in Walmart’s US stores alone. I would however recommend that toy industry executives visit Tokyo toy fair, if only to see the unusual toys on display, some of which may have application in the US.