You probably haven't heard of Mackenzie Cameron, also known as The Author M, just yet. He writes comic strips featuring 4 friends who play board games and we see them in the roles they play (pieces they choose). His site launches today and his work will bring a smile to your face! 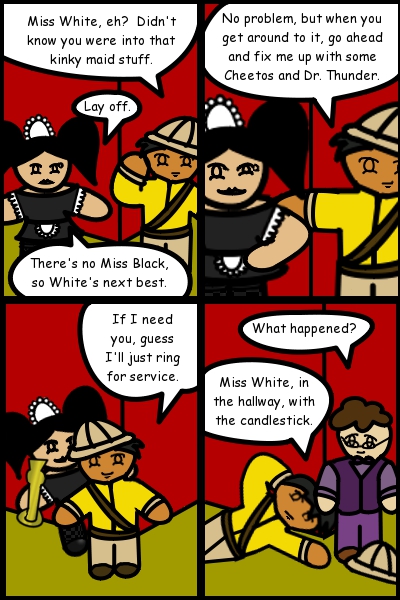 Mackenzie, please tell us how you came up this idea and show us some of your work.

"When my friends and I play board games, the whole night is a laugh riot. Whether it’s the puns, the innuendos, or fighting over who gets to be the Professor Plum in Clue, the jokes flow like water. To quote a friend, who quoted Plato "You can learn more about a person in an hour of play than in a year of conversation." The communities that board games form have greatly influenced my life, and they’re something that has been boiling at my core for some time. The decision to create OverBoard came from attending a convention known as PAX, the Penny Arcade Expo. The convention was established by Penny Arcade, a video game webcomic, and seeing the incredible impact it has had on the video game community has made me intent on doing the same for board games. To show people the comedy and magic that comes inherent with cardboard, dice, and rule books."

Thanks, Mack! You can see more of his work at OverBoard, the Board Game Webcomic.