Last night Kim Vandenbroucke, inventor and author of The Game Aisle as well as subject of an upcoming blog, was the guest speaker at the Indian Trails Library in Wheeling, IL. She spoke with enthusiastic kids interested in learning about her new game and how the "real" game inventing world works. The Game Inventor Series at Indian Trails is a spin-off of 2009 Operation Game Creation: a game design camp (electronic and board) hosted by Indian Trails which I helped kick off. A few dozen eager young faces actually listened to what I had to say about inventors and the history of toy and game invention. Some of those kids went on to be a part of our Young Inventor Challenge. There were some really great ideas.

Due to the smashing success, the brainchild and director of the program, Lauren Rizzo, wanted to host a series of toy and game inventor speakers over the following year. She had some names in mind and I gave her more and she ran with it. This woman has energy and passion. Her top notch speakers included Bruce Lund, Steve Rehkemper, David L. Hoyt, Catherine and Graeme Thomson. 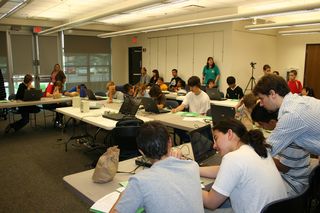 Through my work with the American Library Association, I know libraries have hosted game design camps, although I have not heard the level of success that Lauren has achieved. Currently, the Indian Trails Library’s Summer Reading Program is game-themed, and the second annual gaming camp will be held in August.

In the hope some of you readers find this interesting and wish to work with your local library on a similar program, I've asked Lauren to tell us her secret.

"I’ve always loved to play and wanted to bring that to the kids – but playing involves learning even if the kids don’t know it. Combining my two passions – playing and information literacy – I discovered that hanging out with kids and encouraging them to play works wonders! And the kids just keep coming back," she says.

Operation Game Creation, the original Boot Camp in 2009, started out as a grant from the ALA and Verizon Wireless. An awesome committee of library staff at Indian Trails put their heads together and masterminded one of the most fun projects the library has worked on. The program reaches all ages of kids, and appeals to all types of gamers.

Four experts – Akira Barnes, Nate Schneider, Dan Sabato, and Alex Damarjian – worked to teach kids how to create different types of games. Through a 6-week process, teams worked to make their games, ending with a Game Fair. Judging was difficult, but fun.

OGC 2.0 will feature more speakers and will focus on different aspects of game creation – from getting ideas, to designing, to marketing. Games will be judged by category, and prizes awarded. Applications for the August 14th, 2010 Boot camp can be obtained through emailing Lauren (

Thank you, Lauren! I'm sure she would welcome your questions about how to help your local library start such a program – she has a template for success.