Mike Meyers, in my estimation, is one of the greatest intellects of the modern toy industry that I have had the pleasure to meet.

He recounted to me how the game Ready, Set, Spaghetti, invented by Howard Tarnoff and manufactured by Milton Bradley, came to hit the shelves. It had been rejected by management on more than one occasion before Mike took it on as a true product champion. (God bless him. No product comes to market without a brave soul championing it.) 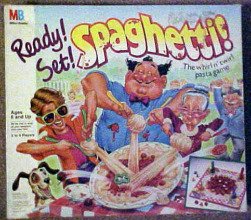 At the first whiff of negative sentiment, Mike would take the product off the table and put another in its place, and a month or so later he would put it back on the table and hope for a different answer. He would keep doing this with products for which he had a special place in his heart, until management finally would relent or forget they didn’t like it before. One day, for whatever reason, they decided they did like Ready, Set, Spaghetti.

Mike also had, and may still have, a secret (his own secret sauce?) technique for evaluating the likely success of a product, he once told me. If it is so easy after a product has come to market to explain why it was successful or to detail why it was a failure, then, he explained, one can deduce these outcomes before the product is introduced, to determine whether it will be successful in the marketplace. His miracle technique was like looking through a crystal ball.