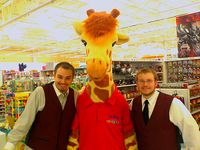 Toys R Us is going public.  I found out about it when I received a phone call from Jeff Horwich of Marketplace Radio.   He was putting together a report on the TRU announcement and wanted my comments for his broadcast which you can hear by clicking on this link.

I see this as very good news for the toy industry.  I can remember two years ago when a great deal of worry bubbled to the surface about Toys R Us’s debt load.  By going public, Toys R Us will  not only have the money it needs to get out from under its debt load but to really do the marketing, the expansion and the store upgrades needed to get back from Wal-Mart its position of industry dominance.

Here is how the Financial Times put it:  “Toys R Us, the toy retailer, said yesterday it planned to raise up to $800m in an initial public offering, the latest in a series of share sales by companies sold to private investors during the private equity boom of 2005-06.”

Toys R Us has since that time really turned it around and CEO Jerry Storch and his team truly deserves a great deal of the credit.  Going into Toys R Us used to feel like an episode of Lost.

The consumer wandered around in a strange place in which store clerks, when found, were as seemingly unfamiliar with the store as the customer was.

Now, Storch and his team have accomplished the arduous task of changing that piece of the corporate culture so that visits to the stores are far more enjoyable with staff that knows its stuff and is willing to share it.