Children are masters of the art of play. They simply know how to do it better than anyone else. They innately know how to create entertaining fun out of anything – the proverbial cardboard box, water, a stick, stones, and as I witnessed this weekend, mud. 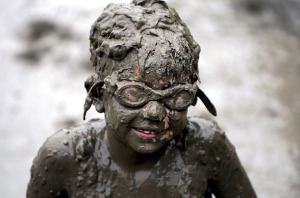 At a birthday party this weekend I watched middle schoolers play, throwing water ballons, then dousing each other with buckets of water, ultimately creating a mud pit in the yard. The mud then became the toy and as they smeared it all over themselves and each other, and threw mud balls until they were all covered from head to toe. It was unbelievable to watch. It was crazy, insane fun and they will likely never forget that party. It was like Woodstock in the back yard.

When I was young I had grass stains on the knees of my pants all the time. As an adult, the only way I get dirty is if I fall down, which is to say, almost never. What a shame that we give up play to such an extent as we get older.

It is amazing to watch kids play, and as adults we have a lot to learn from them. I suppose everything that we learn about creating toys and games comes from recalling our own play as children, or watching the play of others.