After Mary Couzin made the announcement last week that Eddy Goldfarb would be the 2010 Lifetime Award Honoree at the Toy and Game Inventor of the Year Awards, a game broke out in our house. I have had the distinct pleasure of interviewing Eddy on several occasions, first for my book Timeless Toys, and more recently for the documentary film, Toyland. I love my job. I get to meet the rock stars of toy and game design and collect cool, old games that take me directly to my childhood. Thanks to Eddy, all our childhoods were full of big, loud, fantastic pieces of plastic, like my all-time favorite Goldfarb Game, Battling Tops. 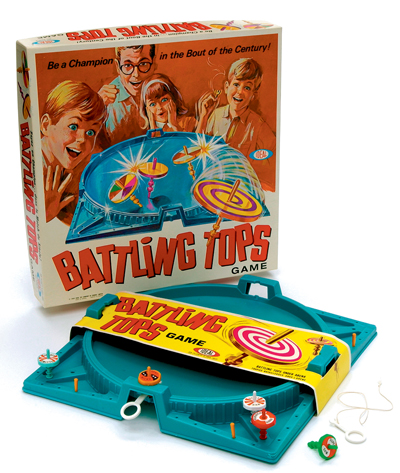 When Battling Tops came out in 1968, I became Twirling Tim. My neighbor was Dizzy Dan. Other friends became Super Sam and Hurricane Hank, while my sisters always fought to be Tricky Nicky. No one wanted to be Smarty Smitty.

When I bought this original Batting Tops game for my book (it was research people!) I was thrilled to introduce the game to my daughters. They love it as much as I did when I was their age.

Passing on games and toys that we loved when we were young is a wonderful way to share our past with our kids. In my case it's also a great way to share a powerful influence. Games like Battling Tops got me interested in science and engineering. They got me to ask questions and think about the way things work. Why did the tops that were wound tighter spin longer? How many criss-crossed pick up sticks did it take to hold up 25 marbles in a tube? Those kinds of questions absolutely influenced my career path, (and the fun didn't hurt either). Inventors like Eddy got me into the game business over 20 years ago and I am so thankful for their influence.

Eddy Goldfarb has been wildly successful. He's licensed over 800 "items," as he calls them and holds over 300 patents for items as diverse as high-intensity flashlights, a housing for computer fans, and yes, even a means by which one could wind up a set of plastic false teeth and watch them delightfully flap. 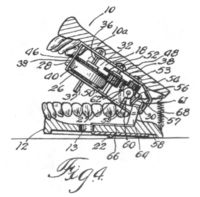 In addition to being an amazing
success, and perhaps even in spite of it, Eddy is a genuinely nice guy. He
always makes time to talk toys and he even opened up this house and allowed us to interview him for our film. He speaks of his wife, Anita with great affection and it's clear that his children love him. He's a good guy.

It's about time that the rest of the world got to know and appreciate how ingenious, inventive, influential, enterprising and amiable Eddy Goldfarb is.

So thank you Marvelous Mary for founding the TAGI Awards and honoring Awesome Eddy. I look forward to seeing you both at this can't-miss industry event!