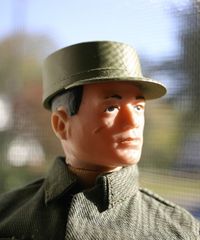 I wrote recently about toys as art and elements in art.  Now we find that toys are also elements in film.

Welcome to the GI Joe Stop Motion Film Festival, the place where toy action figures are featured in dramatic, comedic and scatological short works.  If it sounds weird, it probably is but not too weird to be featured in the New York Times and in the Tribeca Film Festival in New York.

Very interesting and lots of fun!