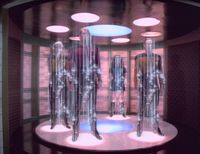 One of the speakers at the DIY Days conference was Bre Pettis, the creator of the MakerBot, an under $1,000 3D printer. Pettis, who looks and acts a bit like a futuristic, wild scientist, is fun to watch and stimulating to hear. He is smart and, through his NYC Resistor

hacker collective in Brooklyn, helping to build the future.
Pettis’s 3D printer comes in a kit so you have to put it together yourself. Once done, however, you can create, download, scan or crowd source software programs that allow you to print out any number of three dimensional plastic objects. The designs that are available run from a whistle to a gothic cathedral to a customized Lego brick (not made by Lego). Visit the website thingiverse.com and you can see for yourself.

Bre talked about an inventor in Germany who created a program for a whistle, posted it on the thinkgiverse website and within a half an hour Bre had printed it out and was holding it in his hand. I know of no other way to get a three dimensional object from Germany to the United States in such a short time. It is, as Bre said, the closest thing to teleportation we have.

Lest you think that this is just fun, I propose, as I have in the past, that this is a potential game changer for toy manufacturing.   This is just the beginning of 3D printing hardware dropping in price; the technology getting more sophisticated and the programs getting more entertaining. Someone is going to successfully launch an in home 3D printer for under $500 and when they do, toy companies are going to be selling downloads instead of plastic.

There are a number of toy downloads already available on the thingiverse website. Here are a few:

Make www.thingiverse.com a favorite on your computer. That way, you may just see the future coming before it hits you over the head.