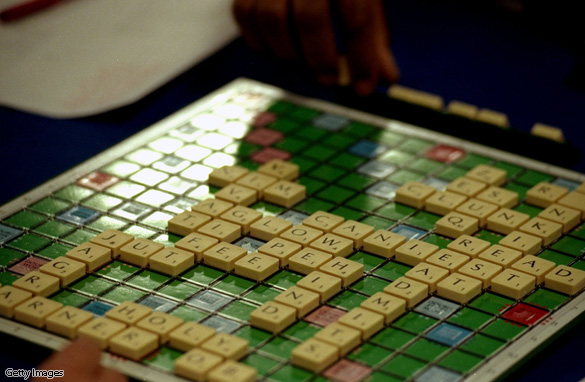 I, like true Scrabble players around the world, was horrified to read that a new U.K. edition of Scrabble was going to allow the use of proper names. Proper names!?; let me tell you something, if there’s no crying in baseball there’s certainly no proper names in Scrabble.

Scrabble, for serious players, is more of an obsession than a game. A serious Scrabbler will literally memorize the dictionary. I for one, during what had to have been in retrospect an incredibly boring period of my life, memorized all of the two and three letter words. Let me tell you, knowing that “Xi”, “Xu” and “Za” are words is a definite advantage when playing with normal people. The problem is that you don’t get to meet too many normal people if you are spending your time memorizing two and three letter words.

With these new rules, however, normal people can play with any serious Scrabble player, no matter how many words he or she has memorized. Who can compete with individuals who have a life time’s worth of brand names from Audi to Zantac permanently imbedded in their brains? And what about first and last names; forget memorizing the dictionary, just memorize the phone book.

What’s next; foreign words, acronyms and abbreviations? Let them all in and the game will collapse under the sheer weight of an infinite number of words. ears that, despite all the hoo-hah, it may all be just a false alarm. Scrabble enthusiasts can put down those paper bags and stop hyperventilating.

According to reporter Daniel Terdiman of CNET, it may all just be a publicity stunt. As he puts it, “According to John Williams, the executive director of the National Scrabble Association, the news is just not true.” Williams goes on to state that “… Mattel, which owns the rights to Scrabble in England, is going to release a completely new version of the game there called Scrabble Trickster, in which anything goes…It's nothing more than a PR ploy by Mattel… Mattel has since confirmed that the new version will in fact be called Scrabble Trickster.”

Never mind. Now back to memorizing the dictionary.